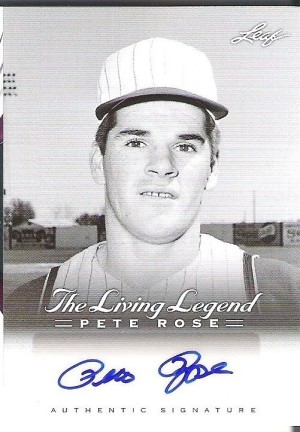 My other Pete auto is also available..

Gavin is 100% correct.  I’ve got tons of stuff to move, though barring unexpected commission money or eBay sales or something, I’m already pretty tapped out for January.  I’d definitely like to set some trades in motion that can be pieced together over the rest of the month and go out at the start of February, however.  So, with that in mind, and the good Gav directing some eyes to my new blog, it seems like a good day to post a little trade bait teaser sampler.

Let’s start it off with some vintage.  A trio of early-’60s league leader cards full of Hall of Famers and stars of their day.  I’m guessing the reason they came to me cheaply enough to use them as trade bait is due to the writing on the backs.  They’re otherwise in pretty solid shape though. 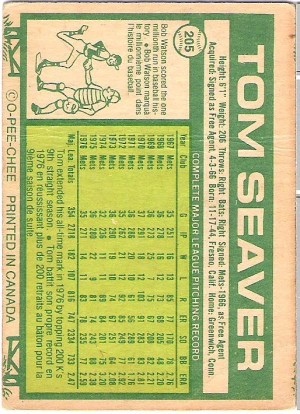 Like any good Canadian, this Seaver OPC is in more rugged shape.  It’s an OPC though, so you’re probably still needing it. 😉

Framed GQ parallels from this past year..

Moving on from the true vintage to the faux vintage with some 2015 Gypsy Queen parallels from several discount hanger boxes I picked at Walmart in December.  I actually have two of the white Goldy & Trout available if you’re in the market for one. 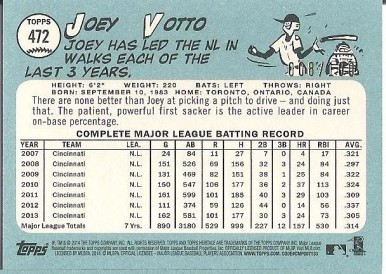 I think the Ryan & Marichal are still around anyway.  I know the mini Votto is though, and he’s the big draw here.  It’s #’ed 8/100.  The mini Vottos from other years (also /100) that had sold when I went to check eBay figures on it went for around $8, so this should be able to fetch me something nice in a trade. 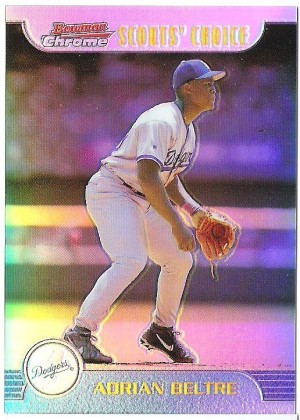 Now for the shinier/fancier/funkier stuff.  Kickin’ it off with this groovy late-’90s Adrian Beltre BowChro refractor. 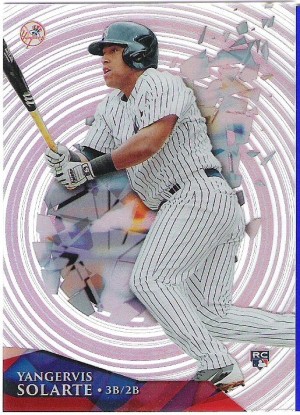 I upgraded my Solarte page with a diffractor #’ed /75, so now this whirlpool pattern version is available for trade.

These are cool.  I absolutely loves me the crap outta some Shadowbox cards, and pick up anybody I can get when they’re cheap enough.  Unfortunately they’re far too thick for binder pages, and 130pt magnetic holders can’t even contain them usually, so most of them end up as extremely bulky, unusually expensive additions to my vast trade bait reserves.

These are just shiny low level flagship things, but hey, a Hall of Famer, the best player in the game, and a fast rising star.  Surely someone will have use for them.

Are you feeling blue?

Those Walmart discount binges tho… Eifert is a regular blue, and the rest are Pulsar Prizms.  A few really nice ones too.  I also have a Matty Ice Pulsar insert, regular blue Jerome Bettis insert, and regular blue Michael Floyd base in the pile. 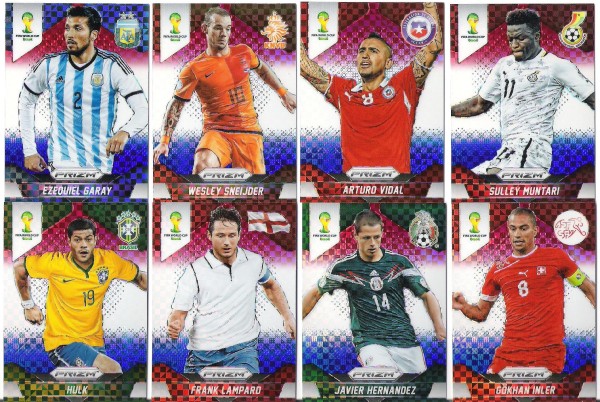 Hulk and Drogba were keepers, but I have all the rest still around for trade because I never got around to throwing them back on eBay after I cherry picked my handful of keepers.  I also have Sergio Ramos Wave, Vincent Enyeama & Blaise Matuidi Power Plaid, and Walter Ayovi, Giovani dos Santos, & Wayne Rooney Pulsars available.

Found a discount hanger box of these at Target.  The redemption auto of Jorge Alfaro eventually showed up damaged (it’s still available though), but these guys are alright.  So have at them.

We’ll head down the home stretch of this post with this Roger Staubach America’s Team relic I received in a trade many moons ago, whose time has finally come to find a more appreciative home.

Yep, I’m closing out this post with a sketch card, because of course I am.  Almost certain it’s of Dan Haren, but as happy as I am that the Cubbies picked him up at the very end of his recently finished career, thus justifying my owning two licensed sketch cards of the guy, one is good enough, and I still like the one received in a trade from years ago with long lost cardsphere favorite Wicked Ortega much better.  I sent a Zack Greinke auto + three other hits for that bad boy, but the one above likely won’t cost you quite as much (I’ll do it for just the Greinke, haha :P).

Alright, there is but the tiniest samplings of all the random ridiculousness I have available for trade.  If you see something you like, hit me up in the comments or at the email address that can be found on my Google profile (which isn’t actually linked on the sidebar yet).

Thanks for stopping by!